Some Nations Could Wait Years for Covid Shots. That is Bad for Everyone

While richer places, such as the U.S., hope to vaccinate most of their citizens within months, poorer countries, like Kenya, expect to reach just small fractions of their populations in that time. 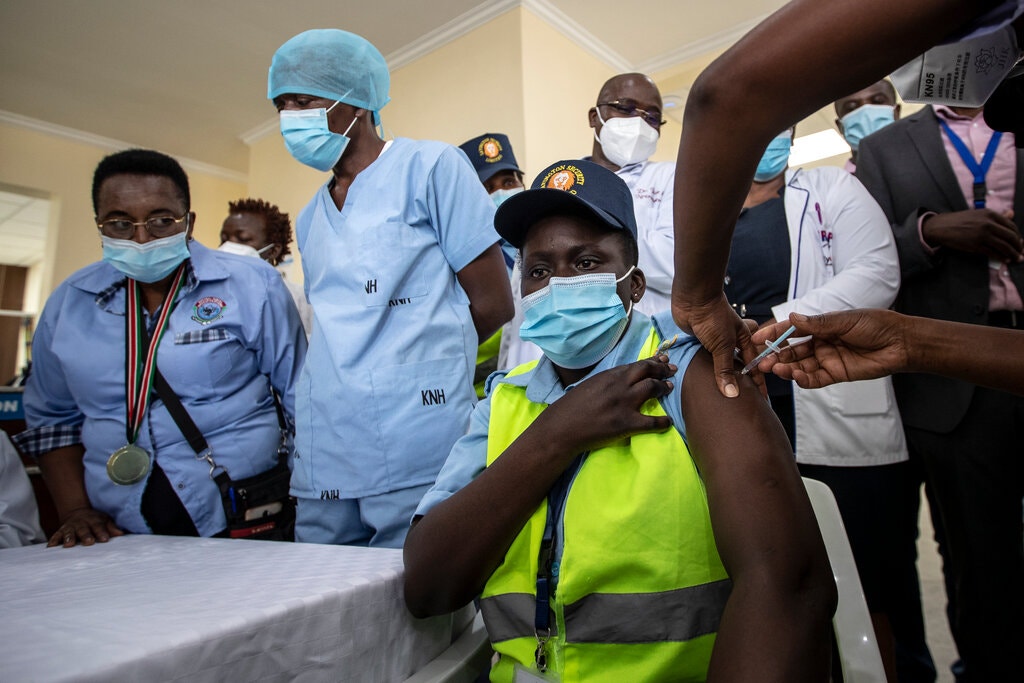 A hospital security guard receiving a vaccine in Nairobi, the capital of Kenya, this month.Credit...Ben Curtis/Associated Press

NAIROBI, Kenya  The nurse lay in bed this month, coughing, wheezing and dizzy with fever.

It was three months after rich countries began vaccinating health workers, but Kenyans like the nurse, Stella Githaiga, had been left behind: Employed in the countrys largest public hospital, she caught the coronavirus on an outreach trip to remote communities in February, she believes, sidelining her even as Kenya struggles with a vicious third surge of infections.

Ms. Githaiga and her colleagues are victims of one of the most galling inequities in a pandemic that has exposed so many: Across the global south, health workers are being sickened and killed by a virus from which doctors and nurses in many rich countries are now largely protected.

That is just the most visible cost of a rich-poor divide that has deepened in the second year of the pandemic. Of the vaccine doses given globally, roughly three-quarters have gone to only 10 countries. At least 30 countries have not yet injected a single person.

Scientists have long warned that such unfair treatment could not only haunt poorer countries, but also rich ones, if the continued spread of the virus allows it to mutate in ways that undermine vaccines. But the greatest human costs will almost surely be borne by less wealthy nations.

Already, unvaccinated doctors and nurses have died this year in countries including Kenya, Mozambique, Nigeria and Zimbabwe, depleting health systems that can ill afford to lose any more workers and threatening to diminish the level of care in nations overrun by variants.

The toll in Africa could be especially profound. The continent has 17 percent of the worlds people, but so far, it has administered roughly 2 percent of the vaccine doses given globally.

'I dont think we have the capacity, as a country and even as Africa, to treat our own,' said Hazel Miseda Mumbo, vice chancellor of the Great Lakes University of Kisumu in Kenya, who has studied the countrys health system. 'While these countries in the West are still scrambling for vaccines, Africa will have to wait. It may be a sad situation.'

In a worrisome sign of how uneven distribution is, even Kenya, one of the continents wealthier countries, is faring badly.

The first million Covid-19 vaccine doses arrived just before midnight on March 2. The elated health minister, Mutahi Kagwe, said that the country had 'been fighting this virus with rubber bullets,' but now had finally acquired the metaphorical equivalent of 'machine guns, bazookas, and tanks.' 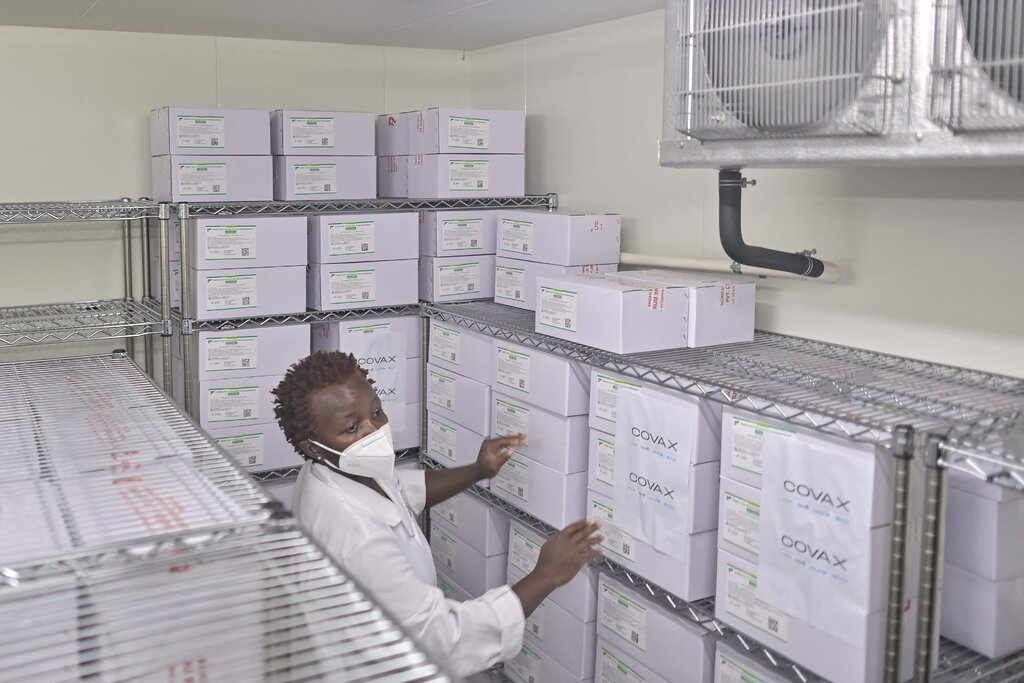 But that arsenal was not all it appeared to be. The doses were a month late, and a quarter of what had been promised. India recently stepped in with a relatively small, but welcome, addition of 100,000 doses. Kenya has no idea when exactly the next batch of vaccines will arrive.

Even under the best of circumstances, the country is expecting to inoculate only 30 percent of its people, or about 16 million out of almost 50 million, by the middle of 2023. When the rest of the population will get their shots is anybodys guess.

The initial shipment of doses is being doled to health care workers and other essential workers.

For the health workers who have been trying to manage a tenfold increase in daily cases since late January, the initial shots arrived only after the illness did. Ms. Githaiga watched from her sickbed as the news media showed health officials and fellow nurses and doctors receiving their shots.

'There was so much shock and anxiety dealing with this virus in the past year,' said Ms. Githaiga, who was recently released after a week in the hospital. 'So how ironic that I was sick on the day the vaccine rolled out. I felt left out.'

For wealthy countries, Kenyas inoculation timeline is unthinkable. Waiting months seems hard enough, especially with dangerous variants circling the world. President Biden has promised to have vaccines for all adults in the United States by the end of May. Israel has vaccinated 60 percent of its people, and Britain has inoculated 41 percent.

Like many developing countries, Kenya is relying on the global mechanism for procuring and distributing vaccines known as Covax. The program was built on the idea that many countries, including richer ones, would use it to purchase shots as a way of spreading their bets across vaccine makers. Instead, dozens of wealthy nations bought doses straight from pharmaceutical companies, elbowing the international effort out of the way and delaying shipments to the developing world.

Still, analysts said, poorer countries are in a stronger position than they would have been without the effort. Covax is aiming to cover at least 20 percent of people in participating countries by the end of the year.

In Kenya, stringent restrictions  lockdowns, curfews, flight suspensions and school shutdowns that eventually forced children to repeat the school year  kept the virus from overwhelming the country last year, as did its relatively young population.

But control measures like lockdowns, available to rich and poor countries alike, are no longer the best defense against the coronavirus. The most valuable currency is now vaccines, opening a yawning gap between those that can afford them, and those that cannot.

The pandemic has worsened in Africa since a variant first seen in South Africa, shown to be able to reinfect people, began driving up cases in southern parts of the continent.

'Before that, it was believed that Africa had escaped this pandemic,' said Tulio de Oliveira, a geneticist at the Nelson Mandela School of Medicine in South Africa. 'Unfortunately, it didnt.'

With cases soaring in Kenya, vaccine delays will cost more lives. The number of reported Covid-19 cases  more than 120,000 infections that have led to around 2,000 deaths  is thought to be an undercount. 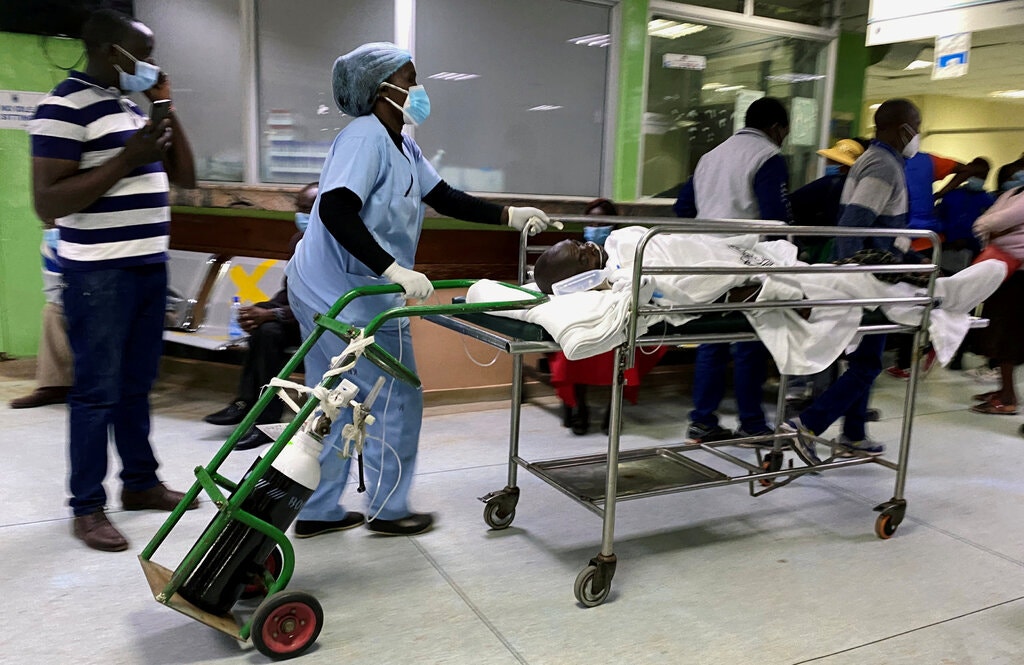 The emergency ward of the Kenyatta National Hospital in Nairobi in December.Credit...Thomas Mukoya/Reuters

The country was expecting more vaccine doses from Covax. But its health officials had also hoped that the countrys close security and trade relations with the European Union and Britain would help it secure vaccines. Kenya had also ignored other countries worries about being used as 'guinea pigs' and participated in vaccine trials, raising expectations for earlier shipments.

'The clinical trials resulted in vaccines,' said Dr. David Ngira, a postdoctoral researcher in global health law at Cardiff University, who has been tracking vaccine rollouts in Africa. 'And on this premise, the Kenyan participants, as well as the surrounding communities and country at large, should have been given some priority in vaccine access.'

But that has not happened. Even Kenyas low expectations have been scaled back: A promised 4.1 million doses from Covax by May has been cut to 3.6 million doses. The country has ordered a total of 24 million doses.

Health officials say they are grateful, but even Covax shots come with a hitch. Vaccines covering the first 20 percent of Kenyas population were free, but only on the grounds that the government pay for enough doses to cover another 10 percent of its people. 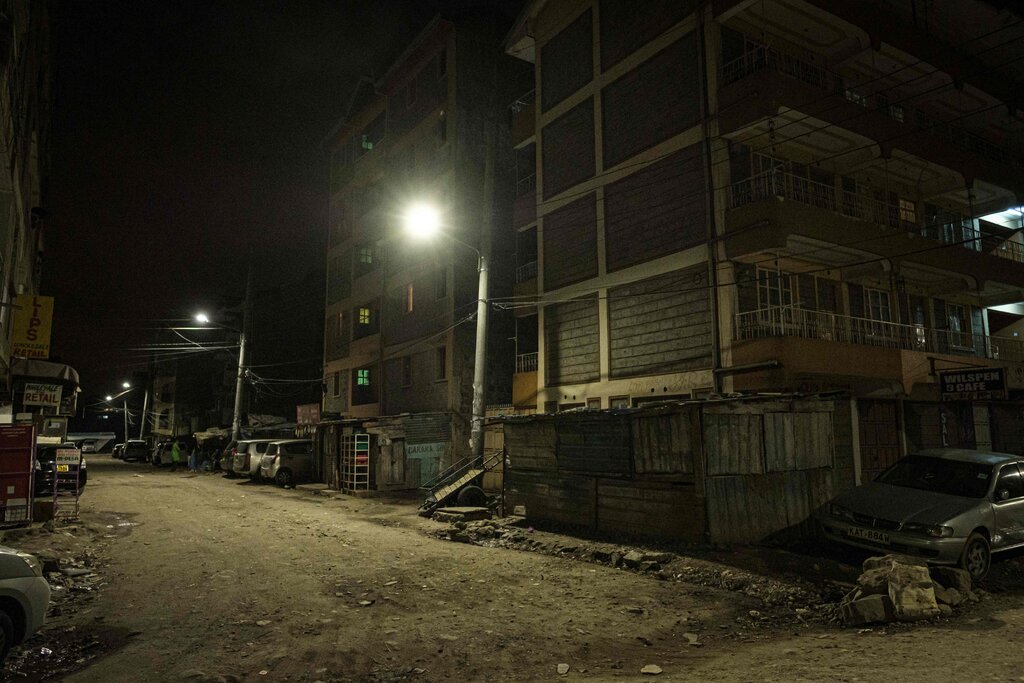 For Kenya, that bill is expected to run close to a budget-straining $130 million.

An African Union vaccine task force is trying to lighten the burden by helping countries access enough doses to vaccinate 60 percent of the continents population by mid-2022.

Vaccine delays are expected to cause economic devastation far beyond those countries that are short on doses. In the most dire scenario envisioned by one group of researchers, with poorer countries largely shut out from vaccines this year, the global economy could suffer losses exceeding $9 trillion, nearly half of which would fall on rich countries like Britain, Canada and the United States.

In Africa, though, the costs of the slow rollout to people and to health systems are already soaring.

In late January, a heart specialist in Zimbabwe  a mentor to younger doctors and a pillar of the countrys health system  was killed by Covid-19. That same month, a senior doctor in northern Nigeria died from the virus, confined to an isolation center.

Kenyas health system was already hobbled last year by mistreatment of doctors and nurses. Many health workers, unpaid for months in some cases and often given inadequate protective equipment, walked off the job, forcing some hospitals to go months without nurses. One had to close its Covid-19 isolation unit and send patients home. In December, a 28-year-old doctor died from Covid-19 after having worked without a salary for months.

'Its a moral emergency to protect health workers worldwide,' Gavin Yamey, associate director for policy at the Duke Global Health Institute, said. 'Sickness and death of health workers in systems that are already weak could exacerbate those problems even further.' 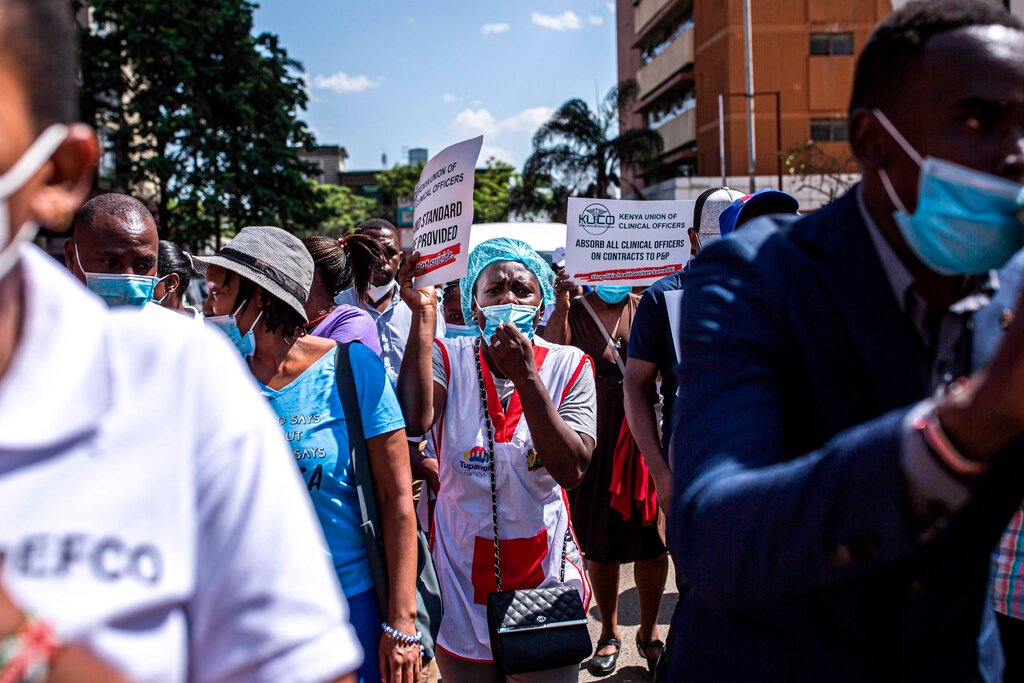 For Nyachira Muthiga, a public hospital doctor who worked on a Covid-19 ward in Nairobi last year, the arrival of Kenyas first vaccines brought a sense of relief. But the crushing experiences of the last year have made her wary.

Before contracting the illness herself, she lost many patients. Substandard protective equipment left her vulnerable, she said. And reports of corruption that cheated hospitals of much-needed money, she said, broke something in her.

Though she got the vaccine last week, she worries that those same endemic problems in the health system  combined with vaccine hoarding by rich nations  could put shots out of the reach of ordinary Kenyans for much longer.

'I am still hopeful,' she said, 'that the health of our citizens will be a high priority at some point.'