Science Through the Lens of Photography

Lifeblood, an exhibition of photographs by Mr Samora Chapman at the Community Art Gallery in Durban. Curated by UKZN Professor and Director of the KwaZulu-Natal Research Innovation and Sequencing Platform (KRISP) Tulio de Oliveira, it aimed to highlight the diversity of humans, plants and animals in South Africa. 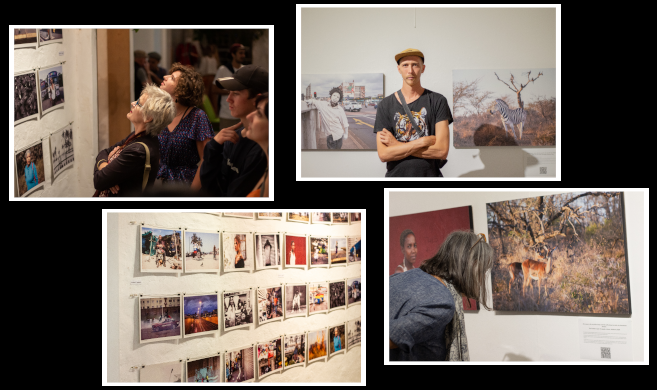 Highlights from the Lifeblood Exhibition held at the Community Art Gallery.

The project, which was a collaboration between KRISP, Genomics Africa and the Department of Science and Innovation (DSI) DIPLOMICS programme, sought to combined science and art, with the art pieces accompanied by scientific facts. 'We asked Chapman to take pictures that captured the genetic diversity around us in Durban and the great biodiversity,' said de Oliveira.

The launch was attended by around 200 people, who enjoyed engaging with the work and exploring the wonders of science from a different and fresh perspective.

Thanking de Oliveira and his team for their support, Chapman said that he created a narrative for the exhibition by pairing images that speak to both diversity and biodiversity and highlight the parallels between them. 'Throughout the project, what I found fascinating were the common threads that connect us, despite our differences, and ultimately make us the same,' he said. 'This project helped me to grow my own body of work and I got the chance to shoot wildlife for the first time, which was a real challenge for me as a street photographer,' he added.

The project was another exciting initiative by KRISP to make science more accessible to the public and followed a business breakfast on Diabetes and Genomics. KRISP is planning further activities in the new year to engage the public on science in new and different ways.

As part of the DIPLOMICS partnership with other genomics laboratories, there are plans for the exhibition to travel to other cities in 2020, including Johannesburg, Pretoria, Cape Town and Stellenbosch.

The exhibition is also available online, together with a podcast from the artist and scientific facts and resources to support the photographs.

Visit http://genomics.africa/lifeblood to learn more and the KRISP website for a short video of the event: http://www.krisp.org.za/news.php?id=338